I am a PhD Candidate in the Computational Astrophysics group (CAstLe) at Leiden Observatory, Leiden University, under the supervision of Simon Portegies Zwart. My current research focuses on the survival of newly formed circumstellar disks in the hostile environment of young star forming regions. I am also very active in astronomy outreach, particularly in Spanish through my website and podcast Primer Fotón. In my free time I like to read novels, do nail art, bake, practice embroidery, and sometimes a bit of drawing and watercolor painting and candy making.

Planets form in circumstellar disks, which are reservoirs of gas and dust that surround stars. These disks develop soon after stars form, and during their early stages they are immersed in an environment that can be very hostile for their survival. The surrounding gas and nearby stars can affect the disks in many ways and make them lose mass quickly, which limits the time and material available to form planets. Understanding how these disks evolve can help us understand the formation of planets and our own solar system.

Encounters with other stars can truncate protoplanetary disks.

In my research I develop computational simulations of circumstellar disks inside star clusters. I implement the dynamics of the stars and the internal evolution of the disks, along with mechanisms that can perturb them such as close encounters with other disks and external photoevaporation. External photevaporation is the process in which bright stars nearby heat the disks enough to evaporate their material and, in some cases, completely destroy them. I implement these simulations using the Astrophysical Multipurpose Software Environment AMUSE, a community effort being developed in part by the Computational Astrophysics group at Leiden Observatory. I analyze the resulting size and mass distributions of the disks and other characteristics of the clusters.

We are lucky to be living in an era where we have powerful telescopes looking at the sky. Nowadays, thanks to enormous observational installations such as ALMA, it is possible to observe circumstellar disks inside their formation environments. Comparing these observations against simulation results offers an invaluable standard to measure if the assumptions in our simulations are leading us in the right direction.

Astronomy is a data-intensive discipline, where Terabytes of information are being produced around the world every night. Quick processing and analysis of said data is crucial for the development of scientific results. Because of this, the pipelines of data processing tools for astronomy are beginning to embrace Big Data paradigms. However, hardware-wise, there are also ways to accelerate algorithms for data analysis.

During my Master’s program in Computer Science I developed a tool for astronomical data reduction and photometry obtention using GPU-accelerated algorithms. The GPU is the Graphics Processing Unit of a computer, and in the last decades the use of GPUs for accelerating mathematical calculations has become standard in many data-intensive areas. The design of the GPU allows for many calculations to be carried out in parallel, thus accelerating the execution times of algorithms sometimes for factors of two orders of magnitude, compared to their CPU counterparts.

However, designing data-intensive algorithms for the GPU is not straight-forward. You cannot just run your CPU scripts on a GPU, the whole problem needs to be re-thought and re-designed to take advantage of the GPU’s hardware.

My thesis (in English, with abstract in Spanish) is available here.

You can check my updated list of publications in NASA ADS. 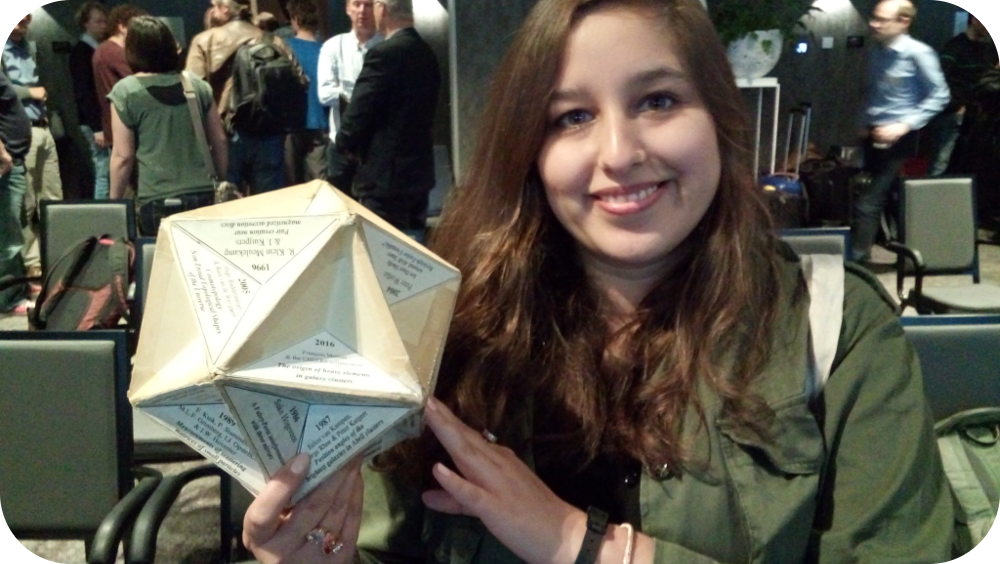 Since June 2015 I run a blog in Spanish called Primer Fotón, which in English means First Photon. I cover the subjects of astronomy and computer science and it is aimed to the general public, focusing on simple explanations of phenomena and scientific developments. I have also been developing the Primer Fotón podcast, where I comment different astronomical news. I use the social media accounts of Primer Fotón to share interesting astronomical events that can be easily observed, and I have more than 10.000 followers on its Facebook page. Primer Fotón is part of Red Latinoamericana de Cultura Científica, Latinamerican Network of Scientific Culture, a platform for latin american bloggers working on science outreach. Since October 2016 I am also part of the directory of the Network. 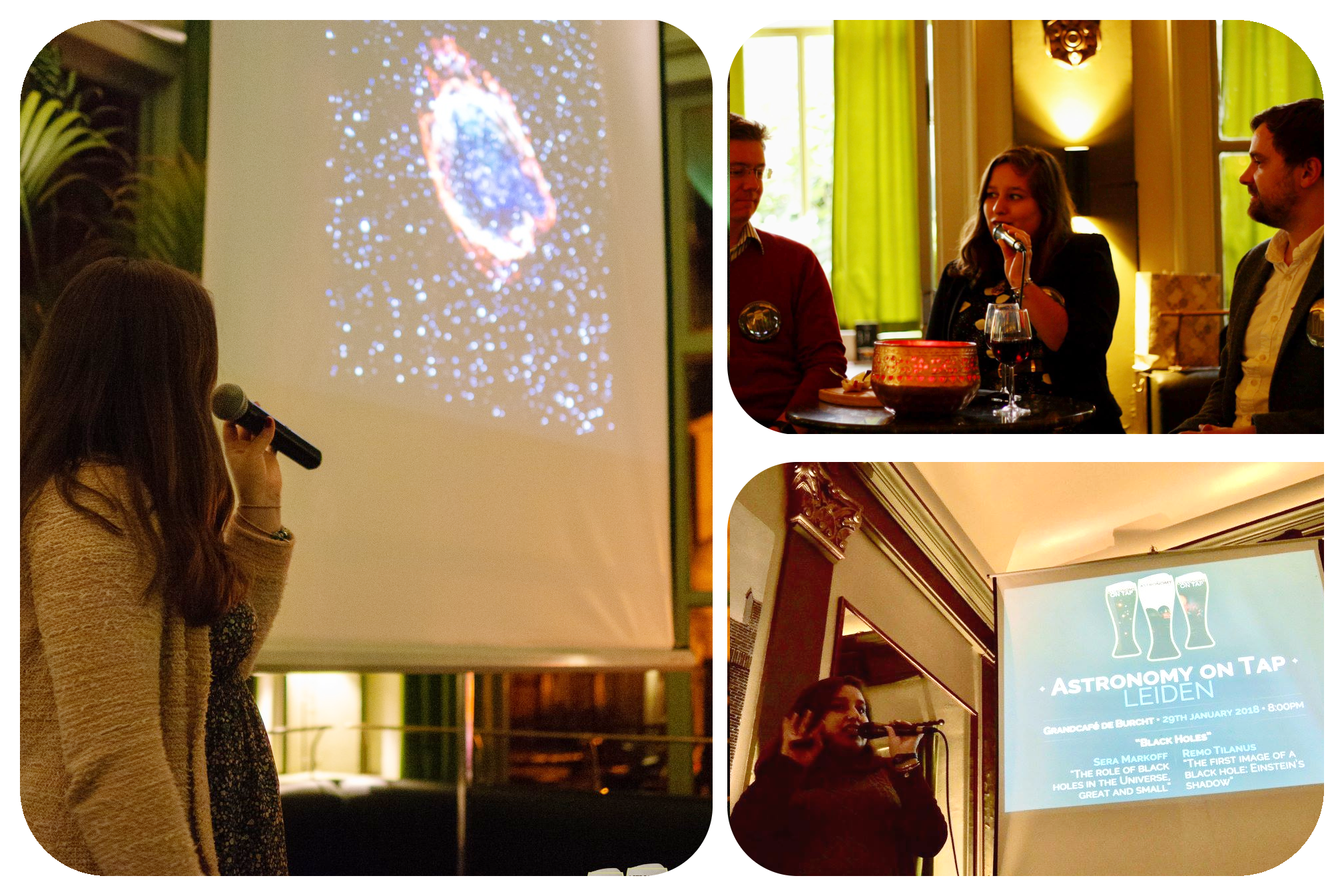 A few months after starting my PhD in Leiden I became part of the group organizing Astronomy on Tap events in our town. Astronomy on Tap is an outreach initiative started in New York in 2013 that brings professional scientists to local bars to share their knowledge with the public. Together with an amazing group of people, we bring Astronomy on Tap Leiden the last Monday of every month to Grand Café de Burcht in the city center. 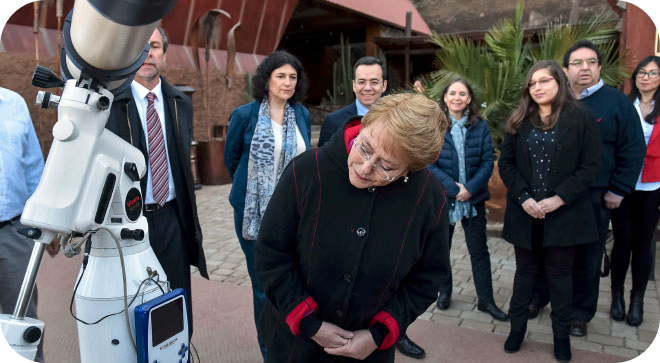 From September 2012 to August 2016 I was an astronomer at Observatorio Astronómico Andino, a beautiful touristic astronomical observatory close to Santiago de Chile. There I had the chance to give astronomy talks to all kinds of people, ranging from middle school kids to Chile’s former president, Michelle Bachelet. The tour consisted in an introductory talk about astronomical objects, looking at the sky with naked eye and learning to recognize constellations and other properties such as the color of the stars, and then observations with binoculars and telescopes up to 14” in size. We also performed demonstrations of astrophotography, and you can see some of my (very amateur) images here. Working at the OAA was a very important step in realizing how amazing it is to share astronomy with the public.

My beginning as a science writer was on Escéptica, the Spanish version of Skepchick. From August 2011 to February 2012 I collaborated with a few articles in Spanish, spanning different subjects (strangely so, not astronomy). These are not my best articles but they hold a dear place in my heart, since they were the first ones I ever published. You can see my articles on Escéptica here.